For a while now, I’ve wanted to figure out something to do with multi-cloud networking and compute. Single cloud is pretty easy these days; if there’s something you want to do, and it’s single cloud, there’s probably at least a handful of blog posts about it. Multi cloud is still a bit more esoteric and ‘weird’ at both the small and large scale, and there just aren’t as many resources available.

Since I finally have Ting Fiber installed at my house, and Spectrum managed to offer me a $25/month discount from what I had been paying to keep it for one more year, I decided it was time to move my website back to my house. However, I wanted to be smarter about it. I didn’t want to expose any ports for my home to the open web, and I wanted to implement redundancy and resiliency more than one way.

Well, I’ve already built a proof-of-concept in the past using K3s in Digital Ocean, using the Public IP there to serve my website. That worked pretty well, but there were a lot of manual steps to get everything up and running. I was hoping that I could get nearly everything automated and repeatable, allowing other folks to use the same logic for their own systems.

What are all the technologies that will be leveraged?

While there are almost definitely better ways to do this, here’s what I ended up going with:

This part was actually among the easiest, relatively speaking. Because I’m hosting these nodes directly on the internet, I didn’t have to worry about some of the more potentially complex networking. I just needed a public-facing networking, internet gateways, and the ability to map public IPs to my VM hosts. My personal requirement was that I wanted to be able to launch everything in the cloud with a single command, terragrunt apply. This means that both all of my cloud providers needed to be put together. You can see all of the code for my multi-cloud Terraform here!

NOTE: You may notice that Google Cloud isn’t in the codebase…keep reading for why that is.

At a high level, the steps for getting everything working looked like this:

While there were a couple of challenges, I was eventually able to get everything working. I can boil things down to some modifications to my k3s-node service file, which I’ll run you through after the parts of the file that matter.

The three sections we care about are:

For line 1, we want to ensure that the k3s-node service only starts after ZeroTier-one.

For line 2, we want to ensure that prior to starting the service, we update systemd-resolve, Ubuntu’s built in DNS service, to route DNS requests to 10.45.0.1 (my homelab’s DNS server) over the ZeroTier network interface.

Line 3 is similar to line 1. We want to ensure that the K3s service REQUIRES that ZeroTier is running.

Right off the bat, in Google Cloud specifically I had an issue where when K3s started, after about 90 seconds the host would lock up, become completely unresponsive, and then require a hard restart. I troubleshot it for a couple days, but it looked like some incredibly strange and esoteric software bug. I left it for a couple days, as I was working on my dayjob, and I was surprised by an email about a day later…

I Got Kicked off of Google Cloud for “cryptomining” (LOL) 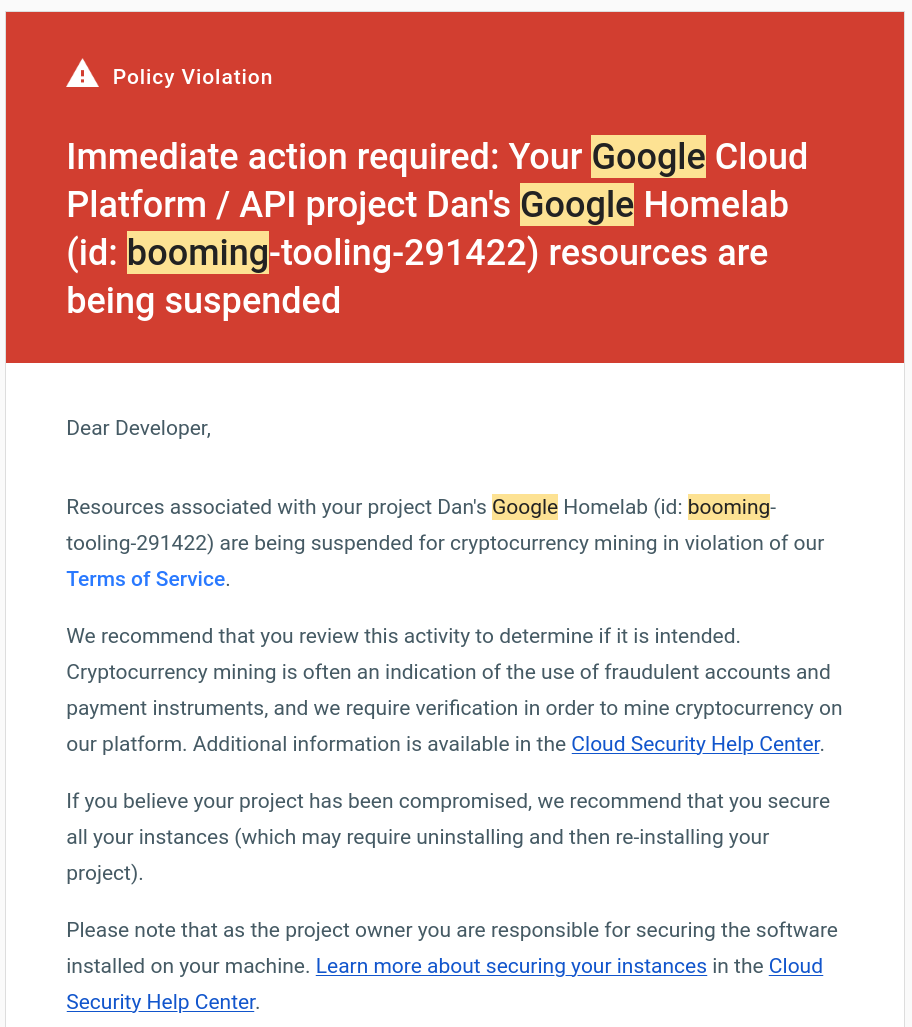 TL;DR: Google sent me an email warning me that because I was cryptomining on my account (which…no) I was having my resources suspended. 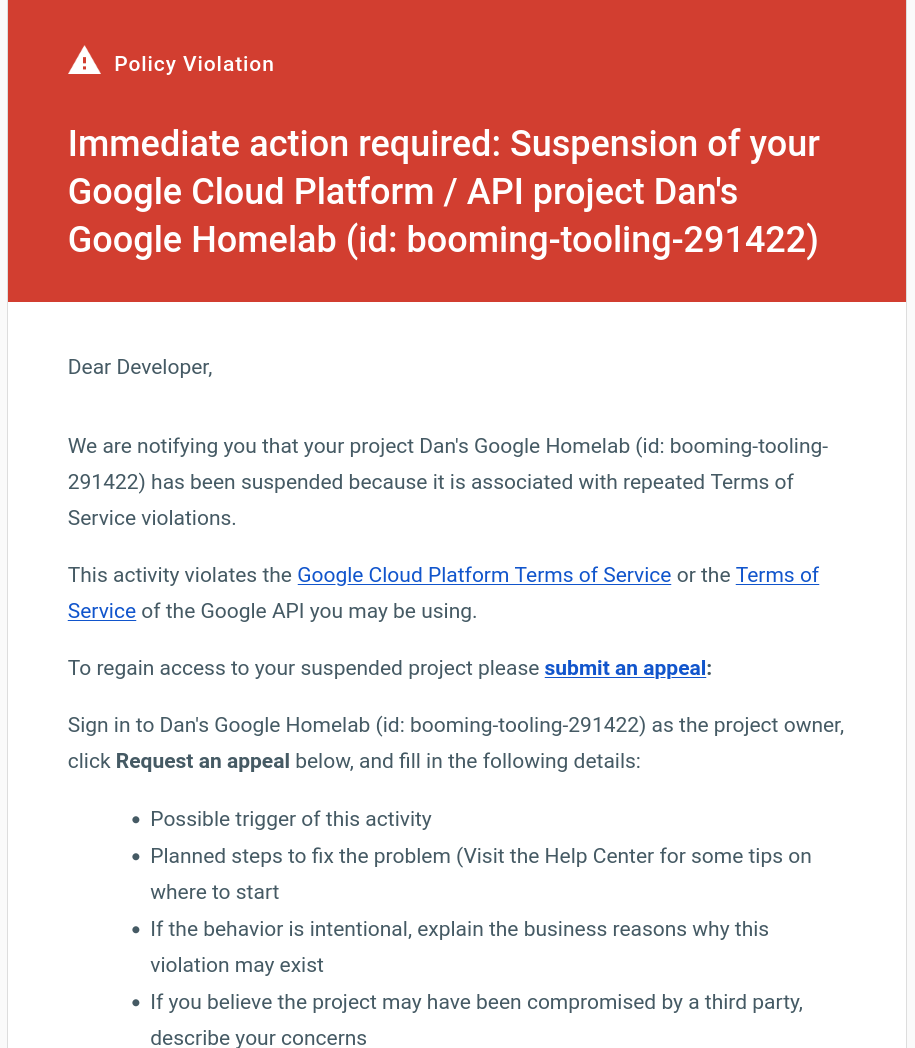 After a back and forth with Google over about 24 hours, my account was unlocked. According to Google Support, the syscalls from my host to the CPU were indicitive of cryptomining on my host, which they absolutely do not permit, and on a phone call made a comment along the lines of “they’re always striving to improve their system monitoring and weed out false negatives.” Fair enough, I guess; but here I am very definitely not cryptomining and I’ve been locked out of my account for trying to run K3s with ZeroTier. Not great.

They did accept my explanation, and unlocked my account, but it definitely meant I needed to figure out what the hell was going on.

After finding a GitHub issue regarding packet flooding and high CPU usage, this is what was necessary to stop the “cryptomining” on my Ubuntu cloud hosts in Google Cloud:

Without that, ZeroTier would hit an odd issue where it would “loop” traffic from the K3s flannel CNI into the ZeroTier network, and because everything is encrypted, it looks like the host is cryptomining. You can read more about it on the GitHub Issue linked here.

So I was able to fix the ZeroTier/Ubuntu loopback issue with Google Cloud, but I was not sold on the idea that I wouldn’t get my resources shut down hard again. I reluctantly decided to steer clear of Google Cloud for the time being, and focus on Azure and AWS as my two cloud providers.

On the bright side, I’m up and operational today in a multi-cloud environment! You can verify this locally by running either dig or nslookup:

So, while you’re reading this, you’re either hitting my AWS or Azure host, with the load split via DNS and whomever responds first!

Feel free to ping me at daniel.a.manners@gmail.com. If something I wrote isn’t clear, feel free to ask me a question or ask me to update it!